Can-Am 2-Wheel Motorcycle Concept Comes out Into the Light

Valcourt, QC — On Friday, March 25, BRP announced two major updates: a return to 2-wheeled motorcycles and definite plans to roll out an all-electric lineup of vehicles, starting with their flagship Can-Am motorcycles.
For a few years now, BRP has been teasing a roadmap for an EV line of vehicles crossing their beloved Can-Am, Sea-Doo, and Ski-Doo brands, as well as several others. They made good on this effort when they released the new Rotax e20 go-kart (shown first in lineup image at bottom) in 2022.

Now, on the heels of their first EV offering, BRP has set a date for mid-2024 to launch these new concepts into reality. This all comes a month after BRP’s winter bi-annual Club BRP event where new Ski-Doo and Can-Am models are typically announced, with José Boisjoli, President and CEO of BRP, stating that more details on these EVs would be appearing soon.

Though some had hoped to see something more concrete at the Club BRP event, the yet unnamed electric motorcycles, four in all, were previewed in a video posted to YouTube just today. Judging by the silhouettes, there appears to be a street motorcycle, an off-road motorcycle, and two electric alternatives to the 3-wheeled Can-Am Spyder and Ryker, two of BRP’s most popular motorcycles/trikes.

“With the motorcycle industry shifting to electric, we saw an opportunity to reclaim our motorcycle heritage and to re-enter the market,” said Boisjoli. “This new product category is extremely important to us, and we are thrilled that Can-Am motorcycles are the first EV models in BRP’s electric lineup to be confirmed to consumers. Many of us have very fond memories of riding the early dirt bike models, and now we look forward to building on the rich history of the Can-Am brand to inspire and impress a new generation of motorcyclists and electric vehicle enthusiasts.”

While we don’t have a definite idea how the final motorcycles will look yet, we can look to BRP’s history to find they purchased the EV brand Alta in February 2019. BRP very likely saw the potential in this street and dirt bike brand. Harley-Davidson purchased a stake in the company a year prior and BRP purchased all the remaining assets and dissolved the company.
The implication of this means both BRP and Harley will be competing for marketshare as North American EV motorcycle brands. While Harley continues to focus on more “traditional” cruiser and touring EVs their brand is best known for, BRP will likely turn toward a sportier design, as evidenced by the video teaser, as well as off-road dirt or crossover motorcycles.

The first Can-Am motorcycle was introduced in 1973 and immediately reigned over motocross and endurance racing. The instant success elevated the brand to an iconic status right from the start. Half a century later, the new products have been developed with many different riders in mind.

BRP is a global brand based in Quebec, renowned for its impressive portfolio of recreational vehicles ranging from pontoons, to engines for small aircraft. In the past two years they have launched a popular Scandinavian snowmobile brand, Lynx, into the North American market, in addition to bringing an innovative new ultralight pontoon to the marketplace, the Sea-Doo Switch, via their Sea-Doo dealer network. BRP brands are sold in over 120 different companies netting the brand over USD$6 billion annually. 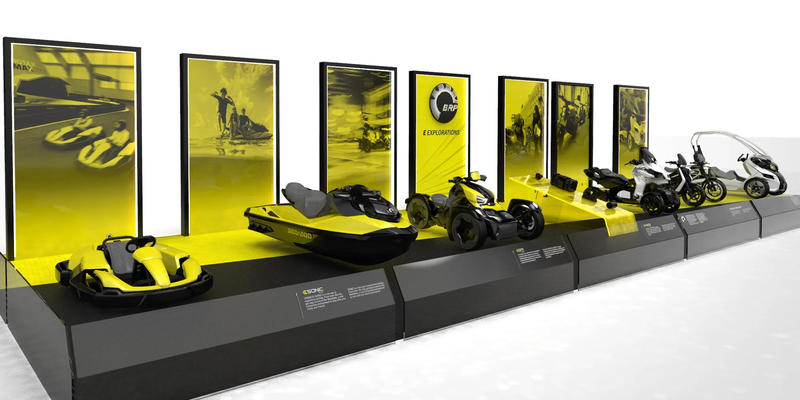 Pictured: In 2019, BRP unveiled concepts for several all-electric vehicle concepts, ranging from a Sea-Doo PWC, a 3-wheeled Can-Am motorcycle, as well as some neighborhood cruiser EVs, and 2-wheeled motorcycles.

Will Burgess is a journalist with Adrenaline Powersports Mag

This site uses Akismet to reduce spam. Learn how your comment data is processed.

Explore important technical tips, product reviews, and industry news to the DIY powersports enthusiasts. With the help of PartsPitStop.com, we post valuable information to keep you on the street, in the dirt, or on the snow.